Growing up, my family created a high engagement learning environment where I was encouraged to ask questions and find answers. Then, as a young graduate student, first of biology and later of public health and then medicine, I was tasked with creating a high engagement learning environment for my students. And thus, as both student and teacher, I began my journey of discovering how humans learn and how hierarchies influence that learning. 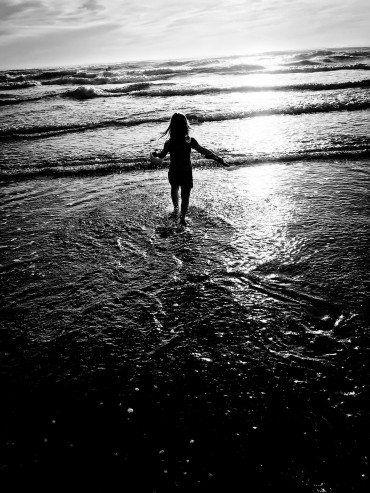 A learner might take any of these individual theories or ideas as truth, however, a seeker of truth will pursue the universal patterns described by the composite insights, patterns that remain constant across culture, discipline and time, so that they may discover the rules for such patterns.    Einstein recognized the value of this type of integrative exploration in 1944 when he commented that, “A knowledge of the historic and philosophical background gives that kind of independence from prejudices of his generation from which most scientists are suffering. This independence created by philosophical insight is—in my opinion—the mark of distinction between a mere artisan or specialist and a real seeker after truth.”    A seeker of the true rules that describe human learning and leadership, I was able to share my first insights from my discovery in my manuscript, “Learning in Humans versus Hierarchies.”

As this photo captures our daughter’s first realization of the power of the ocean and her fledgling steps as a seeker of the truth of that power, it also epitomizes my own journey of discovery to truly understand “how” and “why” we learn and lead.   I not only hope to continue to nurture our daughter’s capacity to ask questions and find answers, but I also hope that we, human beings, will continue to support each other on this same journey as we elucidate the true pathways and rules of our humanity.

This photo was taken shortly before sunset in April 2016 at Ocean Beach, San Francisco with an iPhone 6s; the silvered filter was applied using Photoshop Express.