“The Bells of San Juan Capistrano Mission” was the result of inspiration from 2 etchings by Lawrence Blair named “Campanero Swallows of San Juan Capistrano,” which were given to me in 1953. (His work is in the National Archives). Several years later, I set out to photograph the swallows nesting among the bells at the mission. Unfortunately, they were nesting at the nearby Saddleback College that season.

It is interesting to note that the original bells were moved after an earthquake. After restoration of the wall, the 2 small bells were returned to the original site. One large bell was cracked and replaced by a smaller one. The remaining large bell no longer works. There are 3 bell ringers to ring the working bells for the proper ceremonies at the mission. 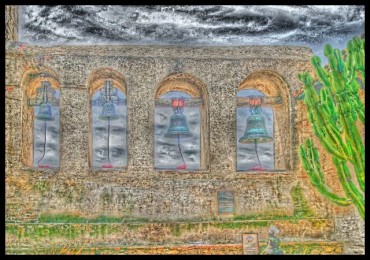 I shot this photograph with a Nikon D200 at 1/150 sec F7.1, ISO 100 at 39mm. I was experimenting with high-dynamic-range photographs at that time and used that technique to photograph the bells. I used Photoshop and Lightroom to process the digital photograph using tone mapping in Qtpfsqui 1.92 Operation Fatal.